‘2020 has already been a fine year for Dutch alternative albums. The Homesick, Lewsberg, Hunter Complex, Zea, It Dokkumer Lokaelstje and Combo Qazam have all released fascinating and very different-sounding records in this first quarter, all showing that the Netherlands is not just a bastion for modern guitar pop.’ 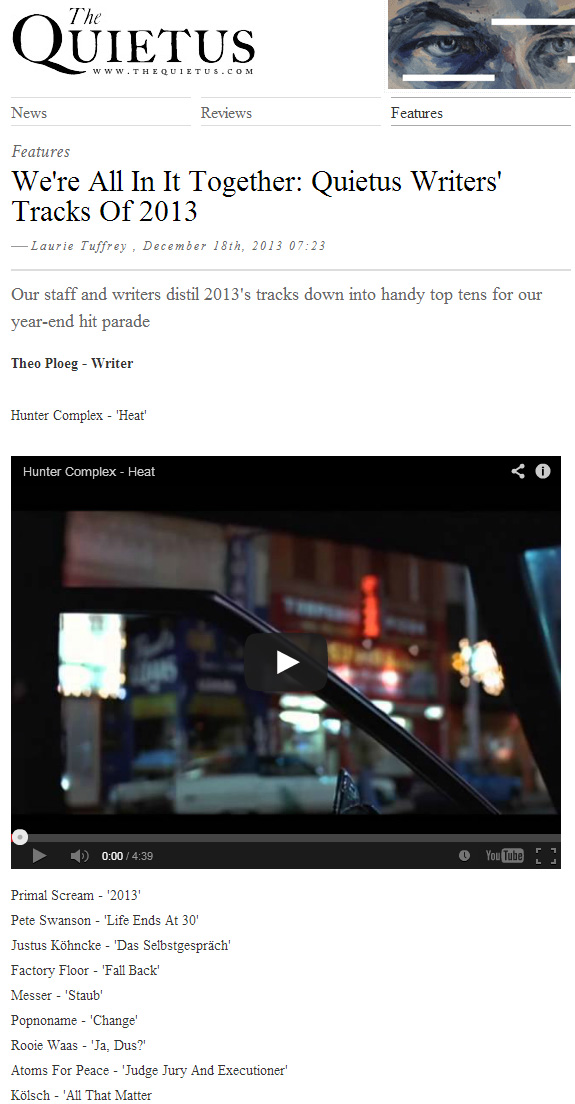 In the opening scene of the film The Informers, based on the book by Brett Easton Ellis, there is this image of a typical Los Angeles 80s party. Everybody seem to be having fun but a closer look reveals ice cold faces without any emotions. As the DJ plays ‘New Gold Dream’ by Simple Minds the LA jet set kids are not actually busy with their bright new future – but with not having a clue who they are. In another scene two main characters Graham and Martin are in a red Porsche over looking LA while Martin is whining about not knowing what to do because nobody ever told him what to do. Heat would be the perfect soundtrack for Easton Ellis’ books.

This is the second album by Hunter Complex, a moniker of Lars Meijer who is one of the founders of the Haarlem based record label Narrominded. His self-titled debut album, released in 2010, was a nice excursion into the synth pop sound of the 80s, but nothing more. Heat is something completely different. Not because of the music, there are parallels in sound between this second and the first album, but in feel and mood and idea. In short, his debut album consists of nice pop songs with good melodies and edgy hooks. Heat isn’t like that at all. Yes, the melodies are smooth, the hooks edgy, but there is something else.

It’s not easy to put into words what that specific ‘else’ is. Heat is more distant and sounds more optimistic, futuristic even. A comparison to Simple Minds’ ‘New Gold Dream’ is tempting, but doesn’t tell the full story. While listening the album for the time I often thought about an another album from the beginning of the 80s: Signals, by Canadian prog-rockers Rush. The album still sounds dramatically optimistic while on the other hand through lyrics depicts a nightmare. Neil Peart’s words deal with a new technological world that will be hard to understand by man, with songs like ‘The Analog Kid’, ‘Digital Man’ and ‘New World Man’ encapsulating the struggle that is called progress.

I get the same feeling with Heat. While Signals embraces new technology to exorcise the horrors of a fast changing society, Hunter Complex is heading back to the time new technology was still fresh and the future looked bright. But the story with Heat is more complex. The ten songs on the album breath optimism and believe in the future and although the emotions go deep, you feel it is as shallow as it can get. When Meyer’s dark, distant voice talk-sings, for example in ‘Highway Hypnosis’ there is definitely something wrong, although the music sounds fresh and crispy. That’s the essence of Heat: the music gives you the chilling experience of being two things at once: alleviation and damnation.

There is only one band that is as good in this discord as Hunter Complex: Trans Am. Surrender To The Night, released in 1997, was like a postmodern dream that in a way predicted the end of the optimistic 90s. Heat seems to sum up the hopeless situation our current world is in. Far from a positive message and instead of easing the pain, like Rush did on Signals, the strong positivism that leaks from the melodic and warm synths make the pain even worse – it’s a brilliant combination.

And then there is the strong visual language of the album cover by Meyer and Narrominded co-owner Coen Oscar Pollack, which works to create even more distance.

In his debut novel Less Than Zero Brett Easton Ellis lets his principal character Clay see a sign with ‘disappear here’ on it. Much more so than the Bloc Party ‘Song For Clay (disappear here)’,Heat is the perfect soundtrack for that scene.

This Friday it's ROCK NIGHT at @operator.radio! M