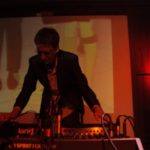 1. Hello. Can you, please, tell something shortly about yourself, for example: what are your current plans, what are your influences for the music of Hunter Complex (your new music project), what does retro-futurism mean to you?
Lars Meijer: I started to record my debut album as Hunter Complex two years ago. I always had the idea to record an album again on my own. In the late nineties I released two records under the name Larz. Those were really lo-fi, recorded on 4-track, with a piano as the main instrument. But after those albums I wanted to do more than record on a 4-track. I started experimenting with loop based songs on mini-disc, but that didn’t work out really. Around that time, we are talking about 2000, I started improvising with two friends of mine, Jantijn Prins and Coen Oscar Polack, and we also used a computer to make beats and stuff. I moved away from recording solo material, but a couple of years ago I started to have that urge again. Coen encouraged me to repair an old synth I had laying around, and I also bought Yamaha DX7, a synth from the eighties which has a sound that I have always loved. Then the songs came back and this new album emerged. I’m currently working on some new songs, one of which is going to be released on Enfant Terrible, a great Dutch label that focuses on retro-futurism and eighties re-issues. The term retro-futurism is new for me. The sound of the eighties I never saw as a dated thing. I grew up with it, that stuff is in my blood. So it’s not looking back, it’s going back to where I’m coming from, and from there I will see where this is going.

2. Do you plan to continue with your other music projects, Psychon and Living Ornaments? The album Korrels by Living Ornaments from the previous year is fantastic!
LM: Thanks for the compliment! Korrels took a long time to make, especially because Coen Oscar Polack and I were focusing more on making music as solo musicians. He is really gotten into field recordings and drone stuff, and I’m into making songs again, and singing, so we are on a bit of different tracks right now. But we still have some music laying around that’s great, but we have no plans yet to get back together again and start working on that. With Psychon we are about to record an EP. We bought sixty records of 1 euro per lp, and those lp’s are going to be the basis of the EP. With Psychon we work really slow, record every 4 months or so. So that will take a couple of years to see the light of day.

3. What are the new plans for Narrominded?
LM: We are trying to keep up the release schedule we started with in 2009. We have a great record coming up by Puin + Hoop, three guys who use whatever they can find to make these intense drones and soundscapes. Really beautiful. Also coming up is a record by Gijs Borstlap en Kruno Jost, electro-acoustic manipulated noise. And a new record by Fine China Superbone, a really tight noise outfit from The Hague, will finally come out this spring. And there’s lots more music coming.

4. What music do you listen and like, from the most recent and new releases?
LM: I’m currently into the last record by JJ, JJ No. 3, a great esoteric pop group from Gothenburg, who are on the same label as The Tough Alliance, who made the best record of the previous century. Also I’m listening to the latest Robert Pollard a lot. You know, the guy from Guided By Voices. That record is called We All Got Out Of The Army and is his best solo album to date. Too bad he doesn’t get the attention he got while he was still with GBV, because this guy is still evolving as a songwriter. And I’ve been playing some old Wang Chung and Thompson Twins records. That shit is timeless.

Hunter Complex is the new moniker of Lars Meijer, who runs the label Narrominded and is also involved with few other musical acts: Larz, Psychon/Psychon Troopers, with a more ambient/atmospheric/improvised kind of sound and Living Ornaments, who had an amazing album, Korrels, the previous year, with a more melodic/rhythmic/idm kind of sound, but also with elements of experiment. But Hunter Complex is totally different! The album was announced with the wonderful EP Here Is The Night, where besides the original version of the title song and the extended instrumental version of the song Fashion Street (from the album), there are 3 interesting remixes of Here Is The Night, by Garcon Taupe, Spoelstra and Coen Oscar Polack, of which specially interesting are the crazy version of Garcon Taupe and the ambiental version of Coen Oscar Polack. The self-titled album is a story of it’s own. Stilistically it ranges from synthpop/new wave to electro, with elements of italo disco, all woven well in the music. Retro-futurism, focusing on the past and on the future at the same time. Some of the songs are a real uncanny candies, like Wait, Cross, Fashion Street and Chinese Restaurants… I’ve always considered the synth-pop as the lonelier kind of music. Or music that grows with time! Fine album!

The new album is done, can't wait for you to hear

Poliziotto Sprint (1977). Another great one from t

Great mailday from @hhvrecords! From left to right

My favourite reissues and archival releases of 202