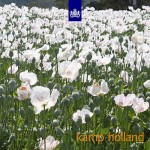 Kamp Holland is a new double vinyl compilation of Enfant Terrible which gathers sixteen bands coming from Holland. The label in the past focused their releases on minimal electronic / experimental pop and industrial electronic sounds influenced or produced during the late 70s / mid 80s. With Kamp Holland Enfant Terrible is redefining things presenting sixteen tracks where some of them have been influenced by the sound covered by the label during the past years and some others are influencing the label for its future releases. Has something changed? Well, yes. I think that this is the most heterogenous release of Enfant Terrible as we find: pulsating and menacing electro sounds (good one Bye bye by Lesbian Mouseclicks), synth retro sounds (Bakeliet with Don’t Let Them Know, Neurobit with Inner Hideaway, Pornologic with Pterodactyl Extraordinaire and Milligram Retreat with Allégement), great synth electro wave (really nice and melodic Ruimtevaart Vooruit by Staatseinde and a good dancey one Desert by Hunter Complex), orchestral breakbeat (Autonon’s Not For Immortals reminds me of Venetian Snares), dark electronic sounds ( Milligram Retreat with Allégement), experimental noisy tunes (Puin+Hoop – Slaapstaking), percussive post punk (Hadewych with Apse sound like a mix of Einsturzende Neubauten and UK Decay), circus weird experimental tunes (Logosamphia with “La Hars” sounds like a 60s hammond toon song mixed with breakbeat on the final part), pure pulsating electronic noise (Peter Quistgard with NONO sound like a gabber track composed with a Commodore 64 while Murw with Een Soort Van Geel sound like a throbbing electro noise collage) and melancholic pop wave (like the closing Itlien by Treasure Of Grundo). Available in mid June.

This Friday it's ROCK NIGHT at @operator.radio! M